Onwards and upwards we go with the developer presentations! This time it´s Dj P himself laying down a few antics from the day he was born. This post will be split into two, the first one featuring the past and the other the present. Hopefully you will get a sense of who he is and what he is about.

Dj P, nickname of Peter Johansson, is currently the Lead Artist/Art Director/Designer at Expansive Worlds. The nickname Dj P was invented by EW staff after a recent and miserably failed attempt at organising a music playlist at a party. The other nickname “Little Peter” comes from the fact that he is almost seven feet tall (and don´t go on to ask! He knows what you’re thinking right now and the answer is “no I don´t”). 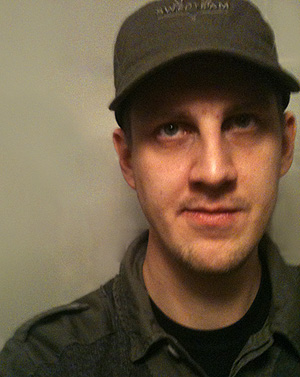 Dj P In theHunter style, with his favourite Swedteam cap!

But first things first, to make a long story short and highlighting some of the essential stuff. I grew up on a small farm outside a city called Örebro in the middle of Sweden. I know how to hand milk cows, drive tractors, wheel loaders and the meaning of “hard work”. I started drawing when I was about six years old (being the only one in my entire family doing that). I was doodling myself all the way through school paying more attention to practical and creative subjects rather than mathematics and grammar. Nowadays I can’t help but partially despise the education system for failing to inspire and teach how all those theoretical subjects apply to real life rather than the classroom itself as they are quite essential after all. After school I worked at the local radio station for about one year designing, building and maintaining web pages. Like every other westerner around the turn of the millenium (It seemed at the time at least) my dream was to become a web designer as HTML and the embossed graphics had become my religion. I also helped out doing radio but quickly concluded it was not my thing, and being really scared at the time about public speaking didn’t really help me either. 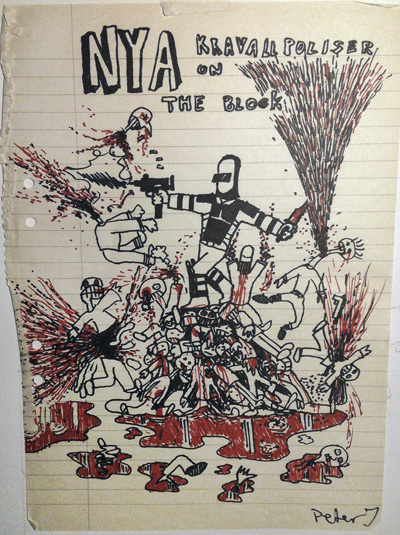 Early work. Could have made a pretty good movie?

By pure chance someone at a newly founded game company found my online portfolio. I recieved a mail from the company asking if i’d like to  work for them, and I ended up moving a few hours away from home to Stockholm. At the time I begun working for that company (Called GRIN) I knew close to nothing about making games and my job was only to paint textures for the 3D models that was created by others. Nine years later I had picked up enough things though to have progressed from being a “Texture Artist” to a “3D artist”, going on to work as ”Lead Artist”, “Concept Artist”, “Art Director” including other “Senior Artist” duties as well. By 2008 GRIN had grown into one of the biggest game developers in Sweden, with a staff amount to almost 300 people in three studios in Stockholm, Gothenburg and Barcelona, and people (myself included) made trips to the US and Los Angeles flirting with the Movie industry. In 2009 and the later part of the global financial crisis the games industry was suddenly hit harder than anyone had anticipated causing the company to suffer from several large title productions being terminated by publishers (naturally crapping their pants on their expenses). The company was decimated to about a hundred employees working in the Stockholm office, but only a few months later the one project still being worked on was also revoked by the publisher causing the entire company to go bankrupt. In hindsight it was of course a very sad but also interesting experience, and probably also a hard life lesson to see so much hard work and serious effort just going straight into a black hole. Two weeks after the initial announcement the company was bankrupt there was nothing left but a deserted office full of dusty hardware. I bought my office chair at the foreclosure auction for 50 swedish crowns (less than $10). 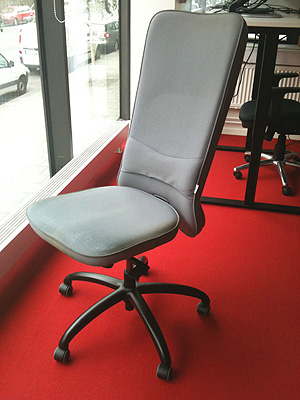 My chair. Best one I ever had!

When a company goes bankrupt in Sweden the government step in and pay people equivalent to the salary they would get through their resignation period (paying the high taxes in Sweden is not always a bad thing). I ended up getting several months worth of salary giving me the opportunity to try something I had been thinking about for a long time, setting up a company of my own and go freelance. I did a few jobs for a movie company and another game studio but soon found myself missing the creative atmosphere within a studio, and not to mention the social aspects of going to the work every day and hang out with other like minded people. I started looking for full time employment in and around Stockholm again but failed to get any as the studios were still holding onto their money like crazy until the financial climate turned back toward the better again. Around christmas I knocked on the door to the Avalanche office and asked to talk to someone (I’m not one who belive that sending an email is enough to make an impression when looking for work). I was rejected at the time but encouraged to come back in a few months. So I did, and I got an appointment with the studio Art Director. Which was too busy too see me when I got there so I got to talk to two other guys, and here´s where things got really interesting!

I came across theHunter already back in early 2009, pretty soon after the game became available to the public. I remember trying it out at work just to have a look at the pretty graphics and was instantly hooked. I’m a simulation/technical person by heart and was struck by the immersion when walking around in the woods, while asking myself; how the ¤#%& should you be able to find any animals in this… mess (of vegetation)! But I was soon successful, and a paying member.. I knew Avalanche Studios was involved with creating content for the game and during the interview I asked (half joking) if they would be interested in hiring someone to work on that project. Naturally I didn´t really think I would get to work on such an obscure project, and I had absolutely no idea that Avalanche had (apparently) acquired and signed the rights to the game just a few days earlier and was planning on setting up an entirely new company to continue developing it. I was totally blown away by the coincidence as it turned out that was the reason I was brought in to the interview in the first place. Of course I got super excited and they told me they would get back with a small work test for me before they could make the final call.

I went home and improvised as I wanted that job more than anything else! While I’m always careful to follow direction and guidelines I´m not the one sitting on my ass if I don’t get any, or if you’re too slow delivering them. I modeled and textured the head of a moose (the very same but slightly tweaked head being used on the Moose in theHunter today). My spontaneous effort was apparently very appreciated and I was hired! 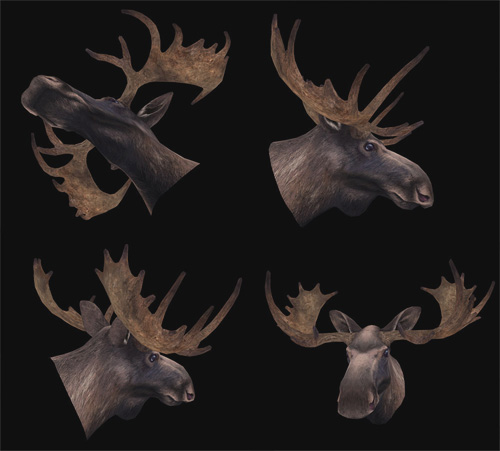